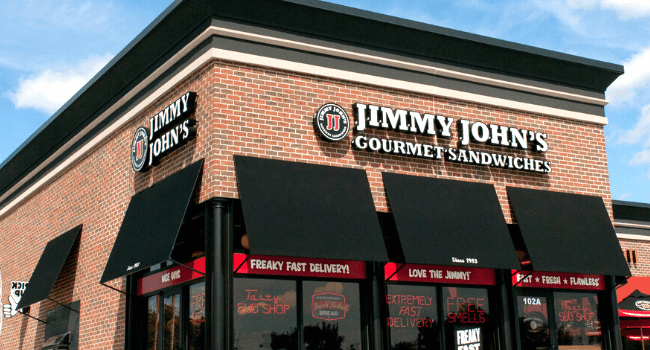 Jimmy John’s is a franchise opportunity that many aspiring entrepreneurs are interested in. Based in Illinois, Jimmy John’s gourmet sandwiches have been around since 1983 and it’s been growing steadily ever since.

If you’re thinking about investing in a Jimmy John’s franchise, it’s important to understand the costs and fees associated with the business. Additionally, it’s helpful to know what you can expect in terms of earnings.

This article will provide an overview of the franchise cost, fees, and earnings potential for Jimmy John’s sandwich shops.

Is Jimmy John’s a franchise or chain?

Jimmy John’s is a franchise of sandwich shops that was founded in 1983 by Jimmy John Liautaud after his father gave him the choice to either join the military or start a business.

In addition to sandwiches, Jimmy John’s offers delivery. The company’s slogan is “The Sandwich of Sandwiches.” Jimmy John’s differentiates itself from other sandwich chains by its focus on fresh ingredients. For example, all of the bread used at Jimmy John’s is baked fresh daily, and the meat and vegetables are hand-sliced.

Thanks to its delicious food, Jimmy John’s has become a popular lunchtime option for many Americans.

How Many Jimmy John’s franchises are there?

Jimmy John’s is a sandwich shop that has been franchising since 1993. At the start of 2022, there were 2,657 Jimmy John’s locations in 43 states across the United States.

The chain is most concentrated in Illinois, which is home to the most Jimmy John’s franchises (over 200). Michigan, Texas, Florida, and Ohio also have a significant number of locations. Many people trust Jimmy John’s brand of sandwiches and in 2019, Jimmie John’s became part of Inspire Brands.

How much does it cost to open a Jimmy John’s franchise?

The total investment necessary for Jimmy John’s franchisees to open ranges from $355,900 – $671,400. This includes the cost of leasing or purchasing a location, outfitting the space, and stocking it with supplies. It is also important to note that Jimmy John’s requires all franchisees to have a minimum of $200,000 in liquid capital and a net worth of at least $1,000,000.

Overall, opening a Jimmy John’s franchise is a significant investment, but one that can be very lucrative for those who are able to meet the company’s financial requirements.

What is the minimum net worth to be a franchisee of Jimmy Johns?

The company is known for its fresh ingredients and it has been ranked as the “#2 submarine sandwich on the Franchise 500 by Entrepreneur magazine. It’s advantageous if franchisees have experience in the restaurant industry. With its proven track record of success, Jimmy Johns is a franchise opportunity that is worth considering.

What is the Jimmy John’s franchise fee?

The Jimmy John’s franchise fee to open a Jimmie John’s restaurant is $35,000. In addition to the franchise fee, you will also need to pay a 6% royalty fee. Jimmy John’s also charges a brand fund fee on gross sales of 2%.

How much does a Jimmy Johns franchise owner make?

The average Jimmy John’s franchise owner makes between $851,969 – $1,034,580 in gross revenue. However, this number can vary greatly depending on a number of factors, such as the location of the franchise, the size of the store, and the owner’s experience.

They also tend to be passionate about the food industry and motivated by the opportunity to grow their business. If you’re considering becoming a Jimmy John’s franchise owner, it’s important to understand that the amount of money you can make depends on a variety of factors. However, with hard work and dedication, it is possible to achieve great success.

Jimmy John’s is a household name, with a high density of restaurants all over the country. Not only that, they boast famous former NFL quarterback Drew Brees as a franchise partner.

Drew Brees’ franchise connection with Jimmy John’s began in 2008 at Purdue University, where Brees was attending college and was a regular customer. He thought it would do well in Louisiana, so he got involved with the franchise while playing for the New Orleans Saints. Today, Brees owns 5 restaurants, and it’s been reported he plans to open 25 in total.

Jimmy Johns had impressive revenue consistency through covid and showed a major jump in 2021 as they went from an average of $766,000 in revenue the previous year to $918,000. Given the brand recognition of Jimmy John’s and impressive unit volumes, it’s likely tough to break into the franchise system.

With that said, if you’re able to acquire locations from an existing owner, or you happen to be in one of the few areas of the country that doesn’t have a Jimmy John’s, it’s a great opportunity to own a durable brand with upside as a multi-unit owner.

Jimmy John’s is a franchise opportunity that is definitely worth considering for anyone with the right qualifications. The company has a proven track record of success, and franchisees can expect to make a decent living from their business. Of course, as with any business venture, there is always some risk involved. However, if you do your research and make a well-informed decision, investing in a Jimmy John’s franchise can be a very rewarding experience.