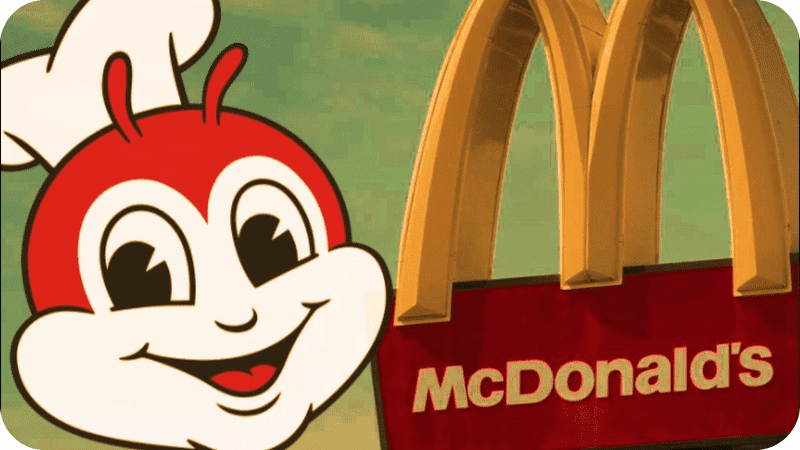 Jollibee vs. McDonald’s: The Rise of the Filipino Fast-Food Chain

In 1978, a small business owner started a burger restaurant in the Philippines. Three years later, McDonald’s entered his market, and he had to choose: compete with the world’s biggest burger chain or sell his business to them.

He chose the difficult path and went head to head with McDonald’s, and today he’s considered the king of Filipino fast food.

This is the inspiring success story of how Tony Tan Caktiong built Jollibee and beat McDonald’s in the process.

The Origins of Jollibee

Entrepreneur Tony Tan Caktiong was born in the Philippines in 1953. He originally got a degree in engineering but decided to go into the restaurant business instead.

Entrepreneurship was clearly in his genes, as his dad was in the food industry for years and had his own restaurant in Davao City in the Phillippines as well.

In 1975, Tony opened two small ice cream parlors in Manila. However, Tony quickly learned that customers were willing to pay for more than ice cream, as many customers kept asking if they also served hot food.

Burgers quickly became the most popular menu item at Tony’s ice cream parlors, so he decided to redesign his restaurants and make fast food the core offering. Thus, in 1978, Jollibee Yumburger was officially born.

Tony’s restaurants were off to a good start in the first few years, but in 1981, a fast food franchise arrived whose unmistakable golden arches typically spread excitement to customers — and fear to competitors.

Tony and his advisors were worried. After all, a huge conglomerate had the money and reputation that Jollibee didn’t, making it nearly impossible to compete.

Tony was advised to sell his restaurants to McDonald’s, or they’d put him out of business regardless.

But Tony didn’t back down. Instead, he hopped on a plane and flew to the United States to study his opponent.

He did this even though McDonald’s already had over 23 years of experience in the franchise world and over 5,000 locations worldwide.

In comparison, Jollibee was just three years old and only had a few locations at the time.

After his trip to America, where he performed extensive in-market analysis, a few things were clear to Tony.

When it came to Jollibee versus McDonald’s, they won in a lot of areas — but not taste. This is where Jollibee had a major advantage.

Filipinos love American food, but as a culture, they have a very specific taste for sweeter meals. McDonald’s wasn’t catering to this aspect of the Filipino palate; they were simply providing the same food in the Philippines as in America.

So Tony updated Jollibee’s menu and brand to fit the Filipino palate and culture in order to appeal to them more than McDonald’s.

How Jollibee Won Over Filipinos

If you’re in America reading this, the menu may surprise you, but a typical Jollibee will serve the following:

The “sweet spaghetti” is especially a fan favorite to locals. Beyond the menu, Tony also crafted the slogan and mascot to be distinctly Filipino:

On top of the first-mover advantage, Jollibee now had:

• Better recipes adapted to the specific taste of the Filipino culture

McDonald’s, meanwhile, couldn’t adapt. But Jollibee’s early success was not lost on them. In the 1980s, they launched the “McSpaghetti” meal in a bid to win over Filipino customers.

McDonald’s even launched the McSpaghetti in American locations, though it did not gain traction and eventually was removed from menus.

Jollibee vs. McDonald’s — Where Are Both Today?

Forty years later, it’s clear who’s leading the Filipino fast food market. Jollibee has 1,150 locations and does about $1.6 billion in annual revenue. Meanwhile, McDonald’s in the Philippines has just 650 locations and $845 million in revenue.

Jollibee, via the guidance of Tony Tan Caktiong, also owns many other fast-food competitors in the Philippines, including brands such as:

• Chowking (the top Chinese fast food in the Philippines)

And with the Filipino market on lock, Jollibee Foods Corporation (JFC) has recently set its eyes on the United States.

Jollibee in the United States

To date, they’ve built 37 Jollibee’s in cities with a heavy concentration of Filipinos, including a large flagship store in Times Square.

Every time a new Jollibee store opens, lines form as early as 4:30 a.m., as Jollibee is a symbol of Filipino pride for immigrants in America.

Not to mention, in December 2018, Jollibee Foods Corporation also completed a full acquisition of the American burger franchise Smashburger, which had about 120 locations at the time.

As of the start of 2022, the Jollibee-owned Smashburger now has 220+ locations, and JFC has big plans for them.

Today, Tony Tan Caktiong is the billionaire chairman of Jollibee Foods Corporation. He presides over the largest Asian restaurant company in the world, with 1,500 stores and plans for further expansion.

If Tony had sold Jollibee to McDonald’s all the way back in 1981, none of his success would’ve happened.

Thanks to his business acumen, ambition, and fearlessness, he turned Jollibee into a deliciously sweet success story that even McDonald’s couldn’t touch.