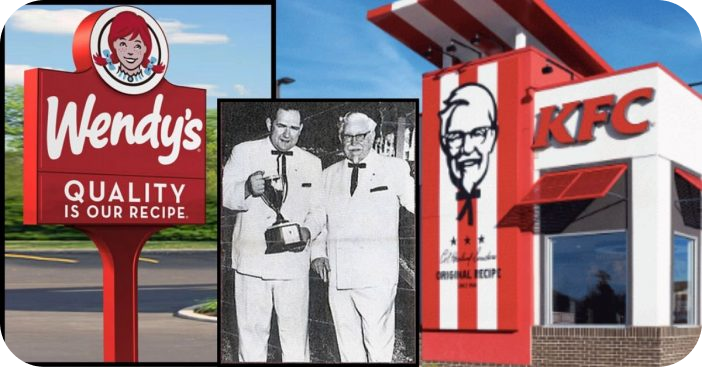 Wendy’s began in 1969, almost 2 decades after McDonald’s and Burger King.

The founder, Dave Thomas, used a combination of marketing brilliance & business savvy to launch and grow his burger business.

The oddest part? Of all places, Dave’s journey to founding Wendy’s begins at a Kentucky Fried Chicken…

Dave Thomas was a high school dropout that served in the Korean War. When he returned home in the 1950’s he got a job as a cook at a small restaurant in Indiana, called Hobby House.

At the same time, Colonel Sanders was in the middle of touring the country & pitching fried chicken restaurant owners to convert their locations to the KFC brand.

As fate would have it, Sanders convinced Hobby House owner Phil Clauss to convert his restaurant to KFC, making Thomas one of the first “cooks” for KFC’s secret fried chicken recipe.

Colonel Sanders quickly became a mentor to Thomas, whose dream was to open his own restaurant one day. In 1962, Clauss asked Dave Thomas to move to Columbus, Ohio to turnaround 4 KFC locations in exchange for equity in those locations.

To say Thomas did a good job with his assignment would be an understatement – he simplified the menu and established new management at each location, which led to sales rising and happier customers. But his most impactful change during his time there? Inventing what is now the iconic red bucket sign that is used across thousands of KFC locations.

Imagine that – the founder of Wendy’s was the one who created the red bucket sign!

The 4 locations would eventually become some of the top stores systemwide, but Thomas had his sights set on bigger endeavors.

From KFC To Wendy’s

Thomas would eventually sell his stake in those 4 locations back to Colonel Sanders. In exchange, he received $1.5 million, a pretty penny back in the 1960’s. He used that money to open the first ever Wendy’s in Columbus, Ohio in 1969.

From the beginning, Dave wanted Wendy’s to be a place known for fresh food that didn’t cut *corners* on quality. To prove this to customers, Thomas used square beef patties with corners that hang out over the bun – yup, this is apparently why they have square patties ¯\_(ツ)_/¯.

This was clearly a way of expressing a core value, but those square patties have also been a key distinguisher for the brand ever since.

Next up was a dessert to complement the burgers. His goal was to create a desert “so thick you had to eat it with a spoon“.  Thus the famous Frosty, “a cross between a milkshake & soft-serve ice cream” was born.

Another side note: I was totally surprised to learn that the “secret” ingredient to the chocolate frosty is a bit of VANILLA to give it a malty taste. Am I the only one?!

Regardless, the killer 1-2 punch of burgers & frosty’s led to early success for Thomas as he expanded Wendy’s in Columbus.

In 1973, Dave began franchising the concept.

Instead of selling single locations at a time, the same way Colonel Sanders was with KFC (and many of the fast-food joints those days), Thomas decided to sell franchises for entire cities & regions in one transaction!

This approach to franchising, now very common and one that I’m a proponent of for franchisees, is known as “multi-unit sales”.

Outside of Chick-Fil-A, it’s tough to think of a brand that won’t sell a multi-unit deal to franchisees.

Today, they have roughly ~6,500 locations worldwide, and is considered the 2nd largest burger chain in the world in terms of revenue*.

So now you know – not only did Dave Thomas found Wendy’s, he also invented the Frosty, created the KFC bucket sign, and pioneered multi-unit franchise sales!

The 3x Grammy nominee was “born and breaded in Kentucky”, according to KFC’s Chief Marketing Officer. The 24 year old rapper, a Louisville native, has a year long partnership with KFC that will include menu innovation and exclusive fan experiences.

Big brands can command big names, and this seems like a good fit for KFC!

I discovered this franchise almost immediately when they launched, and almost partnered with them via the franchise development work I was doing at the time. The brand is kind of like a cooler version of IHOP, but for millennials. With 5 locations open and 20 additional ones being built, they’re now ready to expand nationwide!

Disclaimer: This Content is for informational purposes only, you should not construe any such information or other material as legal, tax, investment, financial, or other advice. Nothing contained on this site constitutes a solicitation, recommendation, endorsement, or offer to buy or sell any franchises, securities, or other financial instruments in this or in any other jurisdiction in which such solicitation or offer would be unlawful under the franchise and/or securities laws of such jurisdiction.

All Content in this email is information of a general nature and does not address the detailed circumstances of any particular individual or entity. Nothing in the email constitutes professional and/or financial advice, nor does any information in the email constitute a comprehensive or complete statement of the matters discussed or the law relating thereto. You alone assume the sole responsibility of evaluating the merits and risks associated with the use of any information or other Content in this email before making any decisions based on such information or other Content.