FRANCHISES OF THE WEEK

The founding story of Toppers is a good one.

It started back in 1984 at the University of Illinois – Scott Gittrich worked at a local Domino’s to earn some money. He would keep that job and ultimately work his way up as a Director of Operations for a multi-unit franchisee of Domino’s.

In 1991, he decided to go on his own and founded Toppers. While he has far fewer locations open today, ~70 locations is a great accomplishment.

Additionally, the unite economics compared to Domino’s aren’t too shabby…

Meanwhile Toppers current franchisees are yielding close to $1.2M in average revenue, and $125K in EBITDA (though I’d recommend paying closer attention to the median EBITDA of $93k). Even so, an emerging restaurant that has an investment lower than $600K and close to six figure EBITDA, is not a common find.

Overall, if you’re interested in the pizza business, this is an emerging brand that could be worth a look. If you do reach out to Toppers via the link below, the only potential red flag I noticed is the franchised units have declined from 56 to 44 locations since 2019.

That could be covid related struggles or a poor choice of a franchisee – but either way you’d want to understand what happened there. 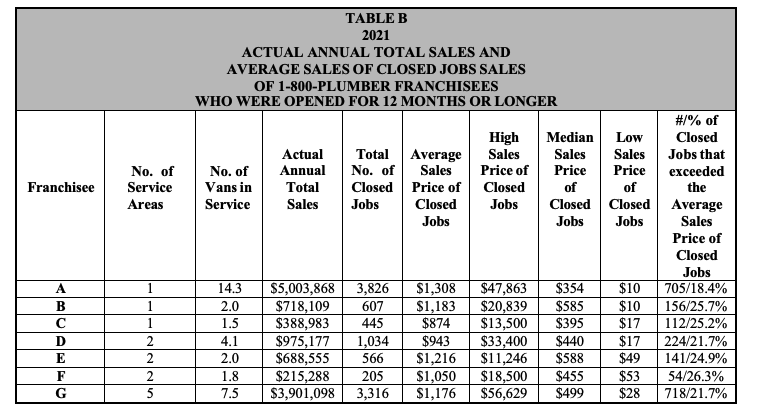 I’ve covered plenty of franchises that fall under the home services category, but this is the first plumbing / HVAC brand I’ve reported on.

Oddly enough, my start in the franchise world came via a supply house franchise called Johnstone Supply. We sold equipment and parts to residential and commercial HVAC and plumbing contractors.

The contractors that had both technical employees (i.e. folks who were damn good at fixing AC & plumbing issues) and a good business sense, would absolutely print money. Most of the competition is unsophisticated mom & pop outlets.

But seeing a company doing both aspects well was rare, and the labor shortages in the industry make finding good technicians difficult.

With all that said though, the numbers for this brand look good early on, and I wouldn’t’ be surprised if the margins are ~20%. If you’re a scrappy entrepreneur, there is definitely money to be made competing in this industry.

Disclaimer: This Content is for informational purposes only, you should not construe any such information or other material as legal, tax, investment, financial, or other advice. Nothing contained on this site constitutes a solicitation, recommendation, endorsement, or offer to buy or sell any franchises, securities, or other financial instruments in this or in any other jurisdiction in which such solicitation or offer would be unlawful under the franchise and/or securities laws of such jurisdiction.

All Content in this email is information of a general nature and does not address the detailed circumstances of any particular individual or entity. Nothing in the email constitutes professional and/or financial advice, nor does any information in the email constitute a comprehensive or complete statement of the matters discussed or the law relating thereto. You alone assume the sole responsibility of evaluating the merits and risks associated with the use of any information or other Content in this email before making any decisions based on such information or other Content.