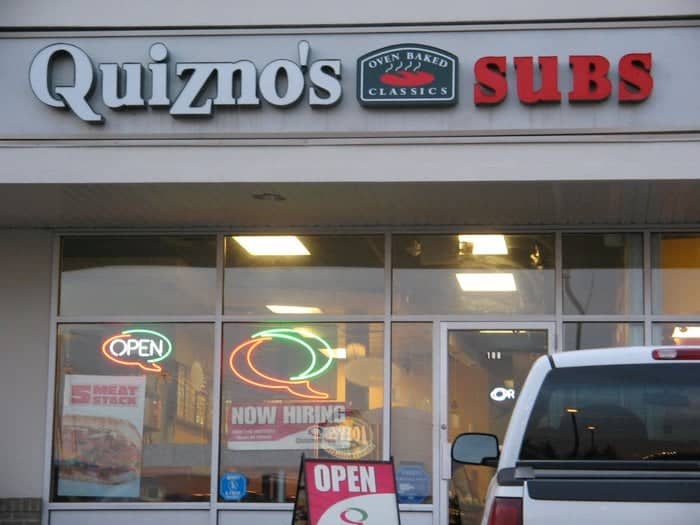 What Happened to Quiznos Subs?

At its peak in 2007, the Quiznos franchise had close to 5,000 locations and was doing roughly $2 billion in annual revenue.

Fast-forward to today, and they have less than 200 stores and can’t stop the bleeding.

We’re going to explore the rise and fall of the toasted sub empire known as Quiznos.

The Beginning of Quiznos

In 1978, business partners Jimmy Lambatos and Todd Disner started a fine dining restaurant in Denver, called Footers. While running that restaurant, they had the idea to launch another concept – this time, it’d be an Italian-style deli.

The partners used Footers as a testing ground for what would become staples of the Quiznos menu – including the baguettes, dressings, and other ingredients.

In 1981, Lambatos and Disner opened the original Quiznos location.

The concept was an immediate hit, and local customers especially fell in love with Quizno’s unusual method of toasting each sandwich. Doing so not only melted the cheese on sandwiches, but it also enhanced the flavors.

When they began franchising, Quiznos became the first business to toast at scale. This is why Quiznos to this day still calls itself the “home of the toasted sub”.

By 1991, ten years after the first Quiznos opened, the brand was up to 18 total locations, mostly in the Colorado area.

When the Schaden’s took over, they wanted growth. To do so, they built infrastructure to support franchise owners via training, marketing support, operations, and more.

2 years later, Quiznos had doubled its store footprint to 40 locations in multiple states.

Then in 1994, the Schaden’s took Quiznos public and raised $4 million dollars in an IPO.

These funds enabled them to accelerate growth far quicker, and by the year 2000, the toasted sub empire had expanded to 1,000 locations.

American Food Distributors is the company that Quiznos mandated all franchisees had to buy their food and paper products through.

All of a sudden, the Schaden realized that by upcharging the goods that AFD sold, they could make way more money by supplying franchisees with goods than from earning royalties.

In peak years, it was reported that American Food Distributors made $200 million in revenue, while royalty revenue was roughly ~$70 million.

The hefty profits they were making were able to fuel even more growth, and Quiznos was able to hit 2,000 locations by 2003.

While on the surface things looked great, franchise owners were beginning to voice concerns..

The Beginning of the Quiznos Collapse

Franchisees were being mandated via national promotions to offer low prices, but they had to pay above-market prices on their food and paper goods.

Fun fact: This was also around the time when Quiznos aired the (now famous) commercial featuring the sponge monkeys.

To make matters worse, Subway entered the toasted sub game in 2004, which destroyed pretty much the only moat Quiznos had. Despite this, Quiznos was still able to grow for a few more years, eventually hitting 5,000 stores by 2007.

But in that year, hundreds of franchisees banded together and sued Quiznos for the markups on their food supplies and mandated retail prices that made it virtually impossible to turn a profit.

When the great recession hit in 2008, the already struggling stores began to shutter, and 2,000 stores had closed by 2012.

The store closures formed a death spiral that couldn’t be stopped. Fewer stores meant less franchisee revenue going to their marketing fund, which made the system weaker as a whole.

With already super tight margins, it was too much for existing store owners to handle, and closures continued.

A majority stake buyout in 2012 by Avenel Capital Group wasn’t enough to save Quiznos, as they ultimately filed for bankruptcy in 2014 – reporting $875 million dollars in debt!

This is a prime example of the negative side of franchising – while the franchise model can be amazing when it works, it goes the opposite direction too.

Quiznos clearly lost focus on supporting franchisees as partners, and instead became an expensive food distributor that treated them as customers.

A quote from a former franchisee sums it up:

“What they’re doing is criminal. I lost my savings. I lost my wife. I cashed in my life insurance policy. I lost everything, but I’m so happy to just be out of it”.

Where is Quiznos Now?

In 2018, Quiznos was purchased by private equity firm High Bluff Capital Partners. At that time, the franchise had about 300 locations open, whereas today it is less than 200.

Judging from their franchise website, their royalties are priced competitively, but only the current surviving franchise owners can say if the supplies are finally priced fairly…